Last week I had the joy of preaching for my youth students in our bi-monthly Youth Sunday Worship. Since Sunday preaching comes about 2-3 times a month, I often look forward to the weeks I get to work through the Word and preach to my church. However, the task is not always all fun and games – in fact, many times it feels more like suffering than it feels like a privilege…

A normal week when I have to preach usually goes something like this: 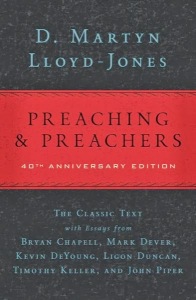 Whether I’m preaching only once, or upwards of three times any given week, the task of preaching is ever weighing on my shoulders. Preaching is one of a pastor’s main tasks in shepherding God’s people by God’s Word. It’s one of the greatest privileges we get to have in studying Scripture. And yet, it’s often one of the heaviest burdens we carry in ministry. As Martyn Lloyd-Jones wrote, in his definitive work on preaching, Preaching and Preachers:

(NOTE – it should be known that “preaching” here is used by Lloyd-Jones to mean the proclamation of the Gospel in making disciples, something reserved not only for the pastors and leaders of the church, but definitely a primary job of church pastors and leaders)

Preaching is one of those things that many of us hold highly, and as a result, hold our pastors to high standards for – and rightly so. Because it’s the most important task given the Church and Her undershepherds (at least according to Lloyd-Jones), it’s often what we focus on the most, what we draw from the most, and even what we criticize the most. People will determine which church they attend largely based on the preacher and his preaching. Ask another church member on any given Sunday, “How did you like service today?” and they’re bound to answer back with something regarding the preaching.

However, I’ve found that we often put such high standards on the preacher and his preaching, that we become “preaching police” and seek for perfect preaching and perfect sermons, from imperfect messengers. We make it a point to be the preachers personal critic (I stand guilty as charged), thinking we know what’s best for him and his preaching – when in reality, we may not realize that our pastor/preacher is his own worst critic.

Though constructive criticism is helpful, I think pastors today could probably use more encouragement than criticism. In an age where anyone can download, listen to, and access the preaching of gifted speakers like John Piper, Tim Keller, Matt Chandler, Mark Driscoll, and other unicorns (because, let’s face it, they’re just as rare and beautiful as a unicorn), it’s easy to put our pastors up against men of the likes and begin telling them how they can be more like _____.

So here are 4 thoughts your pastor probably has – and probably still is – thinking on a weekly basis, which in turn will hopefully help you to grow as a student and listener of God’s Word, and an encourager to God’s servant.

1) “That joke bombed… should I pretend it wasn’t meant to be funny and just move on? Or try to explain it and squeeze a laugh out of it?”

Humor your pastor. Please. Laugh at his jokes, no matter how corny or nonsensical they are. I’ll let you in a little secret – your pastor knows he’s not a stand up comedian. In fact, if it were up to him, he would be very content to read you his latest discoveries on the use of Haaron Haberith in 1 Samuel (that’s, “Ark of the Covenant”). But he also knows that 80% of the congregation would be asleep if he did that.

Instead, he uses his limited story bank, and bad sense of humor, to include that joke or that story for your sake – to help draw you in as a listener and stay engaged. Believe it or not, a pastor’s attempt at humor is a labor of love for his congregation, no matter how painful his jokes may be. Humor him.

2) “I know I’m not the most interesting preacher, but I didn’t think I was boring enough to put people to sleep.”

Nothing is more discouraging to a preacher than people sleeping – or snoring! – in the pews. A preacher could be giving the sermon of his life, preaching with the most zeal and passion he possibly can, but one glimpse of a person dozing under his nose can shatter his confidence, and his focus.

In my first ministry position when I started seminary, I pastored a small youth group of about 12 kids. Though I know I was a young pastor and seminary student, and probably not the most clear preacher, and definitely not the most interesting, I still thought I was dynamic enough to keep the attention of 12 junior high and high school students. But week after week, without fail, I knew at least half of my kids were going to fall asleep during my sermon. Most of them were gracious enough to sleep with their heads down, as if in meditative, deep contemplation. But there was always one student who, without fail – and without shame, for that matter – would fall asleep every week right in front of me: front and center, head cocked back, mouth open, eyes shut tight. Even though I went on to be awarded as my seminary’s preacher of the year, I still thought I was the worst preacher a youth group had ever seen.

Pay attention to your pastor when he preaches. He’s labored 20 hours that week to diligently prepare, write, and deliver God’s Word through his sermon. Honor that. Give your best effort to listen – or at least give the allusion that you are. If you’re prone to falling asleep during sermons, sleep extra early on Saturday nights. Even a lion-like yawn is enough to discourage your pastor. It may sound like we’re insecure, but honestly, who doesn’t have a bit of insecurity when speaking before hundreds, or even tens, of people? Be an encouragement to your pastor, and maybe the extra effort to not fall asleep will even pay off in greater returns for you from hearing God’s Word.

Thank your pastor after he finishes his sermon that Sunday. And thank him specifically. We hear the generic, “Good job” or “Thank you” plenty enough that often times it means nothing anymore. And let’s be honest, how many times have we said “Good job” and not really meant it? Even if you genuinely meant it, go the “extra mile” to give him specific things you took away from his message, specific ways you were encouraged. It not only gives a great deal of encouragement to his heart, it lets him know that you’re not just saying “Good job,” but that you were actually listening and care to hear God’s Word preached.

Even if you don’t think he did a good job, don’t just run past him on the way out and say “Thanks” with a fake smile your face. Build him up and affirm him in the areas that God has gifted him in preaching, no matter how minor and insignificant they may seem – it’ll go a long way. Most pastors already know their weaknesses; help them grow in their strengths.

You might be thinking, “But how is he ever going to know his weaknesses? Someone has to tell him!” For that, I would answer: the one who makes it a point to be your pastor’s personal Devil’s Advocate, or the thorn in his flesh, stop. The Devil doesn’t need an Advocate. The pastor’s flesh is already weak. And I guarantee, the more criticism you heap on him without love and grace, the less he’ll listen to you, and the more he’ll tune you out. In fact, encourage him with only affirmation for the next month, and I’ll also guarantee that he’ll be more willing to hear your constructive criticism. If you want your pastor to hear your opinion and criticism, encourage him.

Every time I preach for our whole church, there are always a few women in our church who personally come up to me, thank me for my sermon, and give me specific examples of how I’ve encouraged them or how God has used my sermon. God has subsequently used these women to encourage me to keep preaching – not because I crave their praise, but because I’m reminded that God is using my imperfect preparations and flawed words. 99% of the time I step off the stage, put my face in my hands, and beg God to not let that jumbled thought of a “sermon” I just left up there stink up the whole sanctuary, but to use it for His glory. These women remind me that He was indeed glorified.

4) “God, my notes are incomplete, and I’m so tired… I beg you to give me your mercy and strength to preach.”

Pray that he would preach with courage, conviction, and joy. Many preachers get on stage knowing many of his congregants have him on their chopping block, dicing him with their glaring eyes. Make it a joy, not a battle, for him to preach.

Pray that he would preach not out of fear of man, but out of fear of God. We all have our quirks when speaking – your pastor is no different. We forget to say things when we should; we add in things when we shouldn’t; we let jokes or comments slip that we immediately regret; we stumble on our words and lose track of our thoughts at times. Pray that he would be more concerned to make God glorious, than to make his congregation happy. Yes, excellence in presentation is something that we strive for, and is the frame with which we present God’s perfect truth. But we can’t be perfect; so don’t expect him to be. Give him the benefit of the doubt, even if it means looking past his occasional bad habits, or quirks.

Pray that he would look more to his perfect Savior while he preaches. He is called to preach not to highlight his (impossible) perfection, but to point us to the perfect Savior. Pray for his joy in Christ, not his perfect accuracy in preaching. And help point him to Jesus after he’s sat down, when the doubts begin to flood, the discouragement arises, and when the fatigue sets in.

What I’ve shared might seem like a selfish desire to get more encouragement from my church members, but my hope is not that at all. The reality is, many pastors around the world are bearing this weight of preaching alone. Help encourage your pastor by pursuing Christ, and pointing your pastor towards Him as well. The greater joy your pastor has in laboring to preach God’s Word, the greater glory our God will receive amongst his people.

View all posts by Clark Fobes